Strange Laws From Around The World 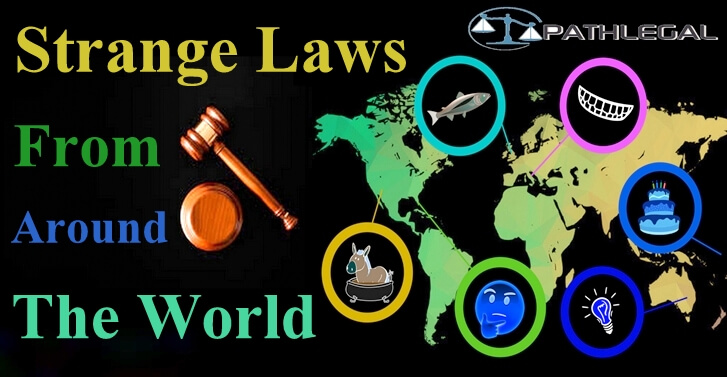 Where ever you live there are some weird laws passed in years gone by or still on the books. Here are some of these strange, often funny, laws from around the world.

1. It's illegal for women to wear fake teeth without their husband's approval in Vermont

In the olden days, women had to provide dentists written permission from their husbands in order to wear dentures. Now the dentist doesnât enforce those laws.

This law was passed so you wonât sell or share passwords to subscription services in Tennessee.

3. It is illegal to handle salmon fish in suspicious circumstances under the Salmon Act 1986

Section 32 of the Salmon Act 1986 stipulates that it is an offense to handle salmon under suspicious circumstances. i.e when it is believed that salmon was illegally fished. The penalty is 2 years imprisonment.

4. It's Illegal to Wear High Heels to the Acropolis

When you are planning to travel to Greece, women should make sure not to wear high heels. The country banned high heels at the Acropolis in 2009.

5. No Selfies With Buddha in Sri Lanka

While taking a selfie, your backside will be facing Buddha which is a sign of disrespect. It is also disrespectful to point your finger at Buddha.

6. No Dancing in the Midnight in Japan

In 1948, while U.S. soldiers were occupying Japan after their victory in World War dancing after midnight was banned to stop liberal Americans from corrupting the good citizens of Japan. At last in 2015. the ban was lifted as long as you are not dancing in the dark.

7. Unless you have a Pre- Purchased Burial plot in France, you cannot die.

Since the cemetery was full in the town of Sarpourenx, the mayor issued an Ordinance in 2008 that you cannot die within the city limits unless you have Pre-Purchased burial plots.

8. Not allowed to build a sandcastle in Spain

Spain is so upset with those who attempt to make sandcastles, that a sandcastle builder can be fined if caught building one in Spain.

9.Â  Â Not allowed to have more than one glass of wine in Bolivia Â if you are a married woman

The Bolivians believe that alcohol may make a woman immoral and their husbands might divorce her if she drinks in public. So enjoy as long as you are single.

There is a law that allows the police department of Ohio to bite a dog if they think it would help the canine calm down.

11. In Sudan, the rape victim gets whipped

In Sudan, the victim gets whipped publicly for being raped.

12.Swearing, bad language, and bad gestures are illegal in the UAE

If such actions are reported to the authorities, and you are found guilty, you can be fined, jailed, or deported.