Public Has A Major Role In Crime Prevention.Do You Agree? 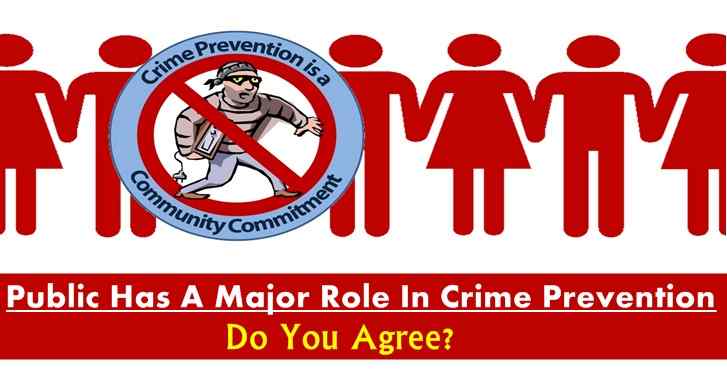 The public is a major role in crime prevention

The public has an important role in the prevention of crimes. Keeping this role in mind, under Section 43 of the Code of Criminal Procedure, arrest has been made by a private person. The constitution makers knew that crimes cannot be stopped without the cooperation of the public.Â Therefore, this rule has been kept, the public cannot run away from their accountability. We see that criminals flee by committing crimes in front of the general public, but the crowd of thousands remains silent spectators and neither tries to catch the person nor immediately. It tries to give information to the police and this public again curses the administration.Â No one is ready to give testimony from among the public, so that the criminals are easily released from the courts and this public accuses that they are not getting justice and the advocates save the criminals,

Crime preventionÂ is the attempt to reduce and deterÂ crimeÂ andÂ criminals. It is applied specifically to efforts made byÂ governmentsÂ to reduce crime, enforce the law, and maintainÂ criminal justiceÂ Primary prevention addresses individual and family-level factors correlated with later criminal participation. Individual level factors such as attachment to school and involvement in pro-social activities decrease the probability of criminal involvement.

Family-level factors such as consistent parenting skills similarly reduce individual level risk. Risk factors are additive in nature. The greater the number of risk factors present the greater the risk of criminal involvement. In addition there are initiatives which seek to alter rates of crime at the community or aggregate level.