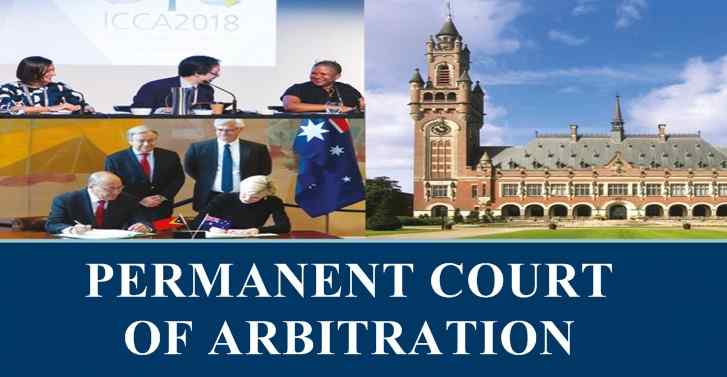 The PCA is not a court in the traditional sense but provides services of arbitral tribunal to resolve disputes that arise out of international agreements between member states, international organizations or private parties. The cases span a range of legal issues involving territorial and maritime boundaries, sovereignty, human rights, international investment, and international and regional trade. The PCA is constituted through two separate multilateral conventions with a combined membership of 122 states. The organization is not a United Nations agency, but the PCA is an official United Nations Observer

The PCA is not a court in the conventional understanding of that term but an administrative organization with the object of having permanent and readily available means to serve as the registry for purposes of international arbitration and other related procedures, including commissions of enquiry and conciliation.Â

The Administrative Council (formally the Permanent Administrative Council) is a body composed of all diplomatic representatives of Member States accredited to the Netherlands. It is presided by the Minister of Foreign Affairs of the Netherlands, who is also a member. It is responsible for "direction and control" of the International Bureau, directs the organizationâs budget and reports on its activities.Â
The International Bureau is the Secretariat of the PCA and is headed by the Secretary-General. It provides linguistic, research, administrative support to PCA arbitration tribunals.Â

In the Articles 30-57 of the Hague Convention of 1899 the rules of arbitration procedure are outlined. These rules are an adapted version of pre-existing treaties among the states. They were amended in 1907, the creation of a summary procedure for simple cases being the most conspicuous change, and were relevant in the 1920s development of rules for the Court of International Justice.Â
The first act of parties before the PCA is the submission of the so-called "compromises", stating the issue and the competence of the arbitrator(s). Proceedings are then conducted in two phases: written pleadings and oral discussion. The Court retires once the debate is over to deliberate and conclude the case by a simple majority of votes.Â

The decision is published as a writ, along with any dissenting opinions. Early Court decisions were countersigned by the arbitrators themselves, but in 1907, that responsibility was passed to the president and secretary (of the PCA). The writ is read to a public session in the presence of the agents and lawyers of the parties to the case. The decision is binding on the parties, and there is no mechanism for appeal.

PCA tribunals have jurisdiction for disputes based on the PCA founding documents (the Conventions on Pacific Settlement of International Disputes), or based on bilateral and multilateral treaties. Its Secretary General furthermore acts as an appointing authority for arbitration.

Mexico v. United States of America
On 9 January 2003, Mexico brought a case against the United States of America in a dispute concerning alleged violations of Articles 5 and 36 of the Vienna Convention on Consular Relations of 24 April 1963 with respect to 54 Mexican nationals who had been sentenced to death in certain states of the United States. At the same time as its Application, Mexico also submitted a request for the indication of provisional measures, among other things so that the United States would take all measures necessary to ensure that no Mexican national was executed and no action was taken that might prejudice the rights of Mexico or its nationals with regard to any decision the Court might render on the merits of the case.

In regard to the legal consequences of the proven violations of Article 36 and to Mexicoâs requests for restitutio in integrum, through the partial or total annulment of convictions and sentences, the Court pointed out that what international law required was reparation in an adequate form, which in this case meant review and reconsideration by United States courts of the Mexican nationalsâ convictions and sentences. The Court considered that the choice of means for review and reconsideration should be left to the United States, but that it was to be carried out by taking account of the violation of rights under the Vienna Convention. After recalling that the process of review and reconsideration should occur in the context of judicial proceedings, the Court stated that the executive clemency process was not sufficient in itself to serve that purpose, although appropriate clemency procedures could supplement judicial review and reconsideration. Contrary to Mexicoâs claims, the Court found no evidence of a regular and continuing pattern of breaches of Article 36 by the United States. The Court moreover recognized the efforts of the United States to encourage compliance with the Vienna Convention, and took the view that that commitment provided a sufficient guarantee and assurance of non-repetition as requested by Mexico.

The Court further observed that, while the present case concerned only Mexican nationals, which should not be taken to imply that its conclusions did not apply to other foreign nationals finding themselves in similar situations in the United States. Finally, the Court recalled that the United States had violated paragraphs 1 and 2 of Article 36 in the case of the three Mexican nationals concerned by the Order of 5 February 2003 indicating provisional measures, and that no review and reconsideration of conviction and sentence had been carried out in those cases. The Court considered that it was therefore for the United States to find an appropriate remedy having the nature of review and reconsideration according to the criteria indicated in the Judgment.

Note:- We try our level best to avoid any kind of abusive content posted by users. Kindly report to us if you notice any. This report may be copied from a news/channel/magazine/blog/site for knowledge sharing, where PathLegal DISCLAIM any ownership of the content posted and offer NO warranty about the data. In case of any objection, please do write to [email protected]