In What Cases In Camera Court Proceedings Are Conducted? 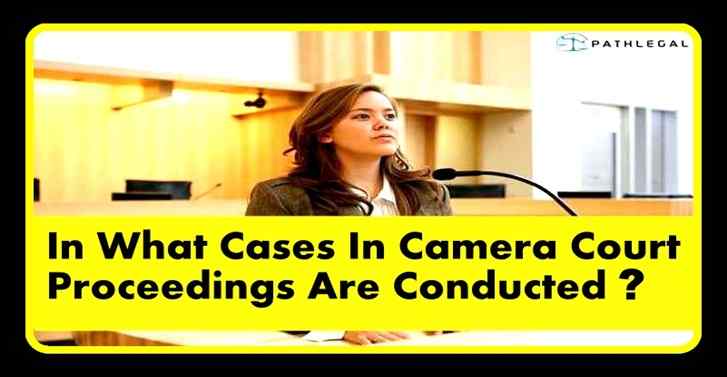 The in-camera proceeding is a private proceeding in the absence of the public and press and it is used in sensitive cases to protect the privacy of the parties. Essentially the proceedings are conducted through video conferencing to safeguard the privacy and protection of the accused. At the same time, an open court is when a case is heard in the presence of public and the press which is the usual process of the court.Â  Further to that in-camera trial shall be conducted as far as possible by a woman Judge.

In our modern society media plays a vital role, where a piece of news relating to cases of sexual harassment, rape, violence, etc. sell fast. The role of media in bringing the offender to justice with watchful eyes has both pros and cons as far as the victim is concerned. A good reputation is a valuable asset of human nature. âIt takes many good deeds to build a good reputation, and only one bad one to lose it.ââBenjamin Franklin. No one would want to disclose to the public.

In cases like divorce, the common grounds found are adultery, cruelty, impotency, desertion etc. Cruelty may include mental shock, physical harassment or excessive or refusal to sexual intercourse. The grounds are linked with the reputation of the parties which is likely to be of a revolting character and may injure the reputation of the party in the eye of the general public. Provided that the ban on publishing or printing case proceedings to an offence of rape may be lifted and maintain the confidentiality of parties.

While emphasizing the importance of the public trial, the judiciary cannot overlook the fact that the primary function of the Judiciary is to do justice between the parties who bring their causes before it. In-camera proceedings are common in the case where young offenders are involved.

Every party is entitled in fairness to a fair and public hearing by an independent and impartial court, in the determination of his rights and obligations so the obscene matters and evidence should be kept away from the public gaze. Access to the legal system is a basic right and public good as the law belongs to each person. The procedure of âin cameraâ is basically in tune with the law of the land and is a much needed and important procedural action from a Court of Law.