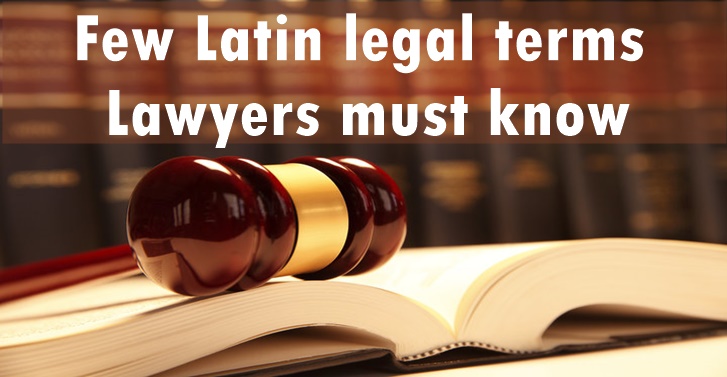 a quo:- Regarding a court below in an appeal, either a court of first instance or an appellate court, known as the courtÂ a quo.

ad hoc:- Generally signifies a solution designed for a specific problem or task, non-generalizable, and not intended to be able to be adapted to other purposes.

ad litem:- Describes those designated to represent parties deemed incapable of representing themselves, such as a child or incapacitated adult.

Cadit quaestio:- Indicates that a settlement to a dispute or issue has been reached, and the issue is now resolved.

contra legem:- Used when a court or tribunal hands down a decision that is contrary to the laws of the governing state.

coram non judice :- Refers to a legal proceeding without a judge, or with a judge who does not have proper jurisdiction.

corpus juris :- The complete collection of laws of a particular jurisdiction or court.

Debellatio :- Complete annihilation of a warring party, bringing about the end of the conflict.

de minimis non curat lex :- here must be a minimal level of substance or impact in order to bring a legal action.

Dictum :- A statement given some weight or consideration due to the respect given the person making it.

et uxor:- Usually used instead of naming a man's wife as a party in a case.

ex factis jus oritur :- A principle in international law that one must take facts on the ground into account when considering the legality of certain kinds of questions.

ex gratia :- Something done voluntarily and with no expectation of a legal liability arising therefrom.

ex parte:- A decision reached, or case brought, by or for one party without the other party being present.

Fiat :- A warrant issued by a judge for some legal proceedings.

forum non conveniens:- A concept wherein a court refuses to hear a particular matter, citing a more appropriate forum for the issue to be decided.

functus officio :- A person, court, statute, or legal document that has no legal authority, because its original legal purpose has been fulfilled.

Gravamen :- The basic element or complaint of a lawsuit.

ignorantia juris non excusat :- Â principle that states that not having knowledge of a law is not an excuse for breaking it.