Current Biggest Environmental Issues That Our World Is Facing 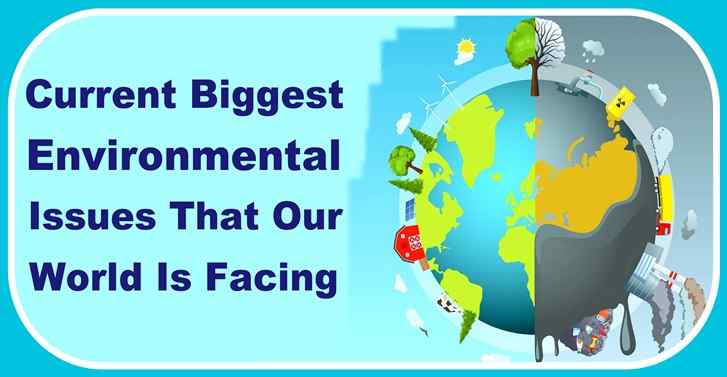 Nature reserves immense potential to maintain ecological balance. With the growth of economic power and unplanned industrial developments, the pressure of natural resources has increased considerably. In this lust for a comfortable life, man has miserably built a high degree of pressure on natural resources thereby causing damages for human well-being and wealth. Man has forgotten that the misuse of natural resources may lead to the destruction of the human race due to the man's increased interference with nature, the problem of environmental pollution has increased considerably. The problem of environmental pollution has assumed international dimensions. If the nuclear test is carried out in part of the world, the injurious effect may be carried by winds in any other part of the world, the injurious effect on the neighboring country than the danger of full-fledged war. The continued degradation of the human environment is the gift of modern living, technological advancement, and industrialization. Industrial development caused a large number of pollutants to affect the environment adversely. The desertification, deforestation and soil erosion has caused ecological in balance.

The United Nations Conference on the Human Environment, having met at Stockholm from 5 to 16 June 1972, having considered the need for a common outlook and for common principles to inspire and guide the peoples of the world in the preservation and enhancement of the human environment, proclaims that, ââMan is both creature and modules of his environment which gives him physical existence and affords him the opportunity for intellectual moral, social, spiritual growthââ. A man has constantly experienced and goes on the discovery, inventing, creating and advancing his surroundings. But if he used wisely it can bring to all people benefit if development and opportunity to enhance the quality of life. If he wrongly and needlessly applied his experience upon his surroundings it may incalculable harm to human beings and the human environment. So many lawyers in India conducting seminars and awareness programs regarding environmental issues.

Throughout the world, we hear the cry against environmental pollution. The environmental problem has global consequences such as acid rains, depletion of the Ozone layer, global warming, etc. Hence the protection of the environment is a global issue and it is not an isolated problem of any area or nation. According to the World Bank Report, in recent years many warning has been issued in many regions of the world in both developed and developing countries that detracting air, water, soil, and other natural resources. This threatens the quality of the environment and life including human life. The urgency of such a warning is not considered by scientists and Government agencies. According to the 1996 World Health Report, 500,00 people are dying every day by infectious diseases. In the last 20 years at least 30 new such diseases have emerged which are threatening the health of hundreds of millions of people. Many of this disease has no treatment, cure, and vaccine. We are standing on the bank of the global crisis on infectious diseases.