"Judiciary Is Facing An Increasing Lack Of Trust By Public"Do You Agree? 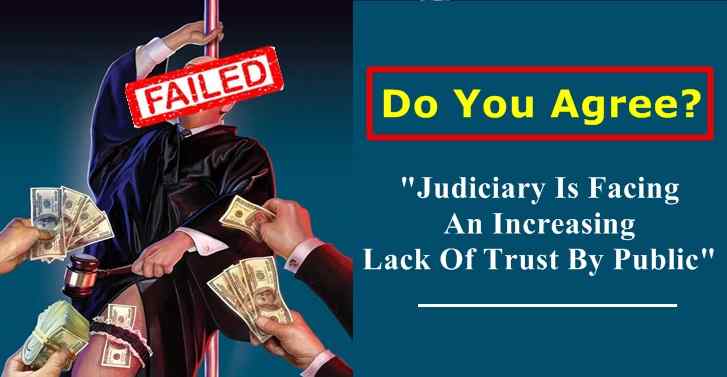 DUTY OF THE COURTS OF LAW

The politics is going down in a narrow and selfish way. Politicians doing wrongs cannot be spared in the absence of the bureaucratic unlawful support. Our politicians cannot be expected to support judicial reforms to ensure justice to the common man in our country. Courts are not only supposed to administer justice to those who can come and fight a legal battle, but also to those who cannot even come to court against the bureaucrats either out of fear or because of unaffordable expenses, etc.

To-day, the victims are forced either to rely upon the mercy of Almighty God or to secure justice through violent self-help as it was the practice in the primitive society, in spite of so many codified laws and courts of laws, etc. I am afraid to say that this may make the victims to form groups for their own defence, land, and security out of disappointment or dissatisfaction over the judicial system in the Country. Such a circumstance would be extremely bad because there would not be any security of life and property in the country. In the end, it may lead to unwanted civil war in any country. This could be prevented only by an independent judiciary like ours by ensuring timely justice to the victims notwithstanding the political or social status of the offenders and wrongdoers including the influential corrupt bureaucrats of our country.